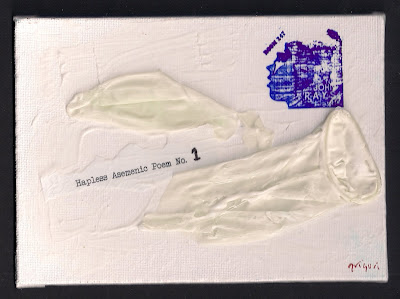 NO JOHN RAYS
Posted by drosspriddle at 10:16 AM

What kind of man's mind sends a JACKED condom to another man. Certainly not James Bond Sean Connery. What does it say? Hey I'll send another man my jackins'. Hey I want this man to possess my jackins'. Its not art. And it certainly isn't Sean Connery James Bond because we knooooow who he is giving his jackins to. Fine lay-duhs!

Gregori assures me it's a clean condom, and I have no reason to doubt his word, do I?

The Trojan is from an AIDS/HIV/Safe-Sex demo my daughter gives to students. This one got torn, thus demonstrating a slip of latex is not a bulletproof vest.

@anon: you seem a little homophobic to my ignorant brain, relax. Also this is ART because R. Mutt says it is.

Since when is it homophobic to not want to possess a mysterious ripped slathered used condom. Do homosexuals keep them around. I don't think so.

He's right. Every dad gets torn condoms from his daughter.

Ignorant Brain sure isn't HOMOPHOBIC. That's for sure.

Since everyone is overplaying condoms, can we now move on to JOCK STRAPS.

"anon" is Truman Bentley Jr., who's address can be found all over my blog, if you wanna send him a little surprise...!

I'm not trying to start a used condom war or anything... haha, just keep me out of it boys!

YAWN. Isn't that the name of the famous poem by Alan Ginsburg.