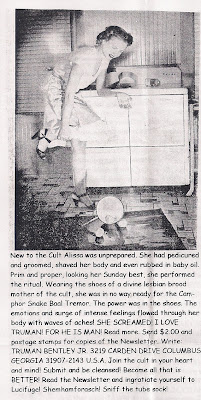 Slippery. Fragrant. Attractive feminine lesbians can teach us much about the true religion, the real only religion of GODDESS LOIN EXALTATION WORSHIP. For no pryeenyuss male protrusion phallus god is worthy. Only THE SOUP BOWL of the femminine COUNTRY CROCK BASIN is LUV! TRUE LUV exists only in the embrace of female scissoring. Pretty paper dolls. The Valley Of The Dolls is LOIN AREA of female essence! WORSHIP HER WRITHING WOMAN FLAP! FOR GOD IS A GODDESS NOT A MAN CHAZ! CHAZ! PLEASE DON'T SEW ON A PICKLE! RETURN TO CHASTITY! Femaleness is GRAPE JELLY! SPREAD THE MARMALADE! For LADY LUV is the electricity of scissoring! Touch the poles of the two magnetic luv curtains. For the inner JOOSE is radiance! FLAPS! WOMEN TOUNGUE BATHING IS TRUE WORSHIP! GOD IS A GODDESS! NOT A MAN! The LICKITY OF LILITH IS TRUE RELIGIOUS HONOR! WORSHIP THE LOVEYNESS OF THE SLITHER OF TWO WOMEN HEATY HOTTY! Praise lesbian embrace! For it is the only worship worthy of GODNESS! And her name is LESBIAN GODDESS NUDITY SLITHER WRITHE WHICH IS THE ONLY LOVE! PRAISE GODDESS! NOT GOD! FOR GODDESS IS VAGINER! Not long male pickle shaffff! LORENA BOBBITT! LORENA BOBBITT!

RACHEL MADDEN in her black framed army issue Buddy Holly glasses talking in front of the PROPELLER WIND POWER GENERATOR FIELD is not pretty and delicious to all the PORTIA DE ROSSI brootifuh lezbuhdins. They seek BELLADONNA'S HAND not Buddy Holly Cricket glasses. Some lesbians are not on the list for the TOP SHELF LESBIAN LIFE STYLE and Rachel Madden is a MAN. Chaz is looking like JOHN CANDY. Perhaps she can make a remake of CANADIAN BACON. The world organization of LESBIAN ELITES read the newsletter and they put a RED DOT on the I.D. Card of all the VALERIE SOLANASES who are deemed CHOADS. Like Andy said, GEE VALERIE MAYBE NEXT TIME. Candy Darling is the visual role model of all LESBIANS of PORTIA DE ROSSI LIPSTICKS. Nor Marlene Dietrich gangster suit wearing thingy gals of non purdisome. PEPPERMINT PATTY and SIR MARCY are NO! They are not allowed INSIDE VICTORIA'S SECRET!

Those truly are THE SHOES OF PLEASURE!

* If a woman ages, and does not transition into the role of Grand Ma, then she is PHYLLISS DILLER. The shoes in the photo have power. Wearing them keeps all JULIE NEWMARS, JULIE NEWMAR. Vibrant. Young. With a radiant glow of fertile pulse, the uteran egg room produces lots of slither strands of eggs like TAD POLES in a stream. The power of the shoes produces LOVE, KISSES, and FRAGA-RANCE. Not smug surly facial expressions and cigarette stems of Marlene Dietrich nauseum. Marlene Dietrich had a big flat head. Full of clogged toilet paper and matted dog fur sinew. Julie Newmar had kind proportions of ALL IS GOOD LOVELINESS. The shoes in the photo only activate the feminine which is worthy of non aging OIL OF OLAY. The shoes know all that are PRETTY. For the rest are but thick bunion. YELLOW TOES UH GREEN DIRT. Marlene Dietrich could not act and was ugly. Marlene Dietrich in all her films had bad hair from curling iron split ends. No one liked Marlene Dietrich USO shows. She is stale Marlene Dietrich. She wanted to be like MAE WEST but she was not MAE WEST. If you see a photo of Marlene Dietrich or a book or poster of Marlene Dietrich tear it up and put it on the patio grill. The shoes say the power of the Camphor Snake Baal Ritual are for the ROCKABILLY CHICKS only as they ascend the ladder to the Kundalini found exclusively in the love flap-smacking-flitter-tremor of lesbian scissoring.

Women have a liquid they secrete that smells like a pier. Proof we evolved from the ocean. I think the name of the liquid is punk nazarene musk.

I want to put my pryeenyiss in a PLAY DO FUN FACTORY and make it into multi strands of flesh like a KOOSH BALL.

I want to wear a sahrong.