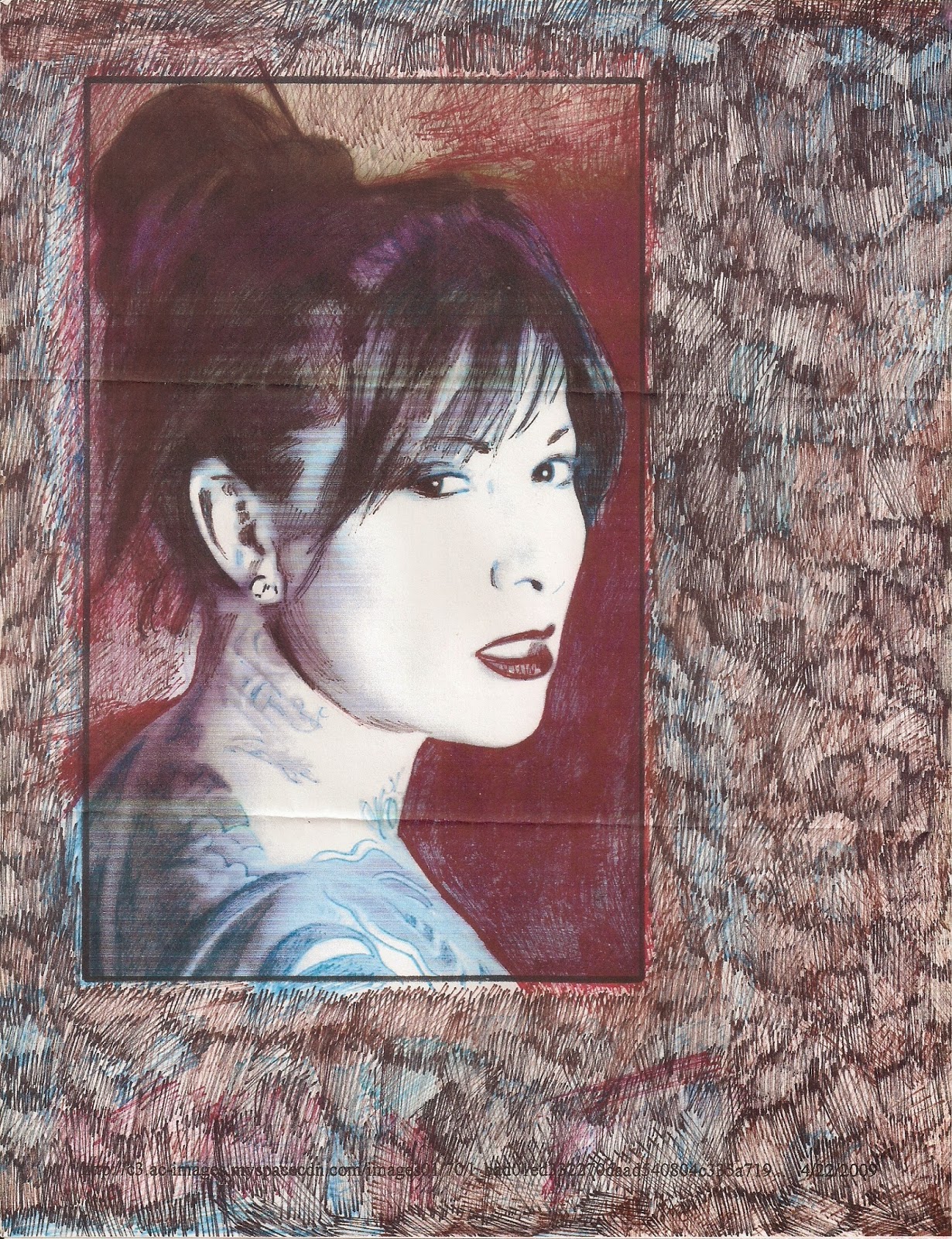 
Posted by drosspriddle at 4:01 PM

The woman in this piece of art is Madison Stone. She was an adult and B-horror movie actress. Today she owns a tattoo shop and the Madison piercing is named after her. She has also been a rock music performer and was in several bands. She was born in 1965. Probably the best movie she was in was called Evil Toons. It starred David Carradine and had cult actor Dick Miller in it. It was directed by Fred Olen Ray. A truly bad movie that you must see. I looked for it forever, then I found it for free online. It came out in the very early 90's. I have always liked Madison and I think she is very funny and interesting. I enjoy doing artwork of her like this piece.

If you took your index finger and rubbed it on the cleft of her nostril on the side where it meets her face, then smelled your finger. You would instantly REFLEX GAG.

Congress shall make no law respecting an establishment of religion, or prohibiting the free exercise thereof; or abridging the freedom of speech, or of the press; or the right of the people peaceably to assemble, and to petition the Government for a redress of grievances.

In the future, everyone will have 15 minutes of shame.

John Ring-a-ling would be oh so ashamed. The legacy of his fame has been turned to shame.

Read Rape Of An Estate by Joe McKennon (if you can find one of the copies not being hidden away at 5401 Bay Shore Road in Sarasota, Florida 34243 USA!

In my opinion, I don't believe John Ringling would be all that happy with what his museum has become and some of the things it has done which go directly against the will that he left behind. I feel that his first wife, Mable Ringling, would be embarrassed that a circus museum was added to her property and so close to her Rose Garden that she took such great pride in.

A man who worked at the John and Mable Ringling Museum of Art, named Joe McKennon (now deceased), self-published an 80 page book called Rape of an Estate in 1986 which recorded issues of abuse and misuse at the museum before Florida State University took control of it in 2000. In the book, the author admits his guilt in helping to turn the museum away from just art. He worked there as a circus curator and by restoring the many circus wagons on display there. The publication also reprints John Ringling's will. In the will, it is stated that no one has permission to ever change the official name of the museum itself and that it is always to be called The John and Mable Ringling Museum of Art. Rape of an Estate is bound in a simple way with a plain white cover with big blue text. The museum was so threatened by this small book, that they tried to get all the published copies and still today stores them under lock and alarm in their circus museum building. There are stacks of the book in a locked circus archive room that the public is not allowed into. Only the security attendants on the 2nd and 3rd shift during patrols are allowed in that room and also a limited number of circus museum employees. The museum has tried to bury this book away because, as the word "rape" in the title suggests, it shows the museum in a negative way on many issues. This is an example of both censorship by the museum and of the museum trying to control what the public perception is of both its history and its deeds. There are a very few copies of Rape of an Estate around and it can sometimes be found online available for sale on sites like amazon.com.

I worked for FSU at the Ringling Museum of Art for 7 years. I saw the stacks of this book that they are trying to keep as little known as possible in my opinion. Just a few weeks ago, FSU police called me and told me to stop "blogging about my experiences while working at Ringling" or I would be arrested for "cyber stalking" I was also told that I was banned from all FSU property for life and if I came onto their property I would be arrested for trespassing. The officer told me that "Ringling does not want to hear from you." I do not wish to be arrested for expressing my opinion, but I believe I have the right to do just that in the United States of America. I also think this story deserves to be heard for people to make up their own minds about it.

You're so sheer you're so chic
Teenage rebel of the week