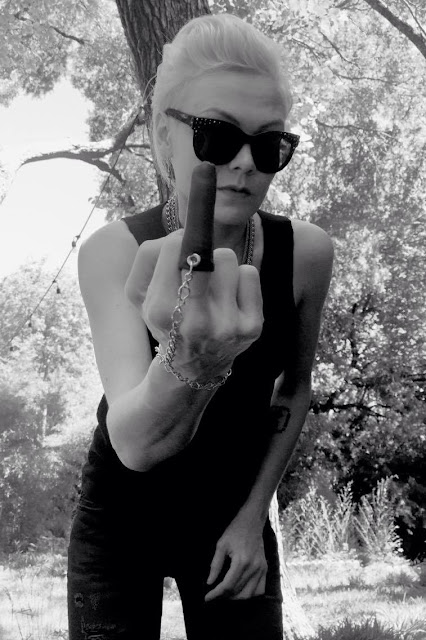 Posted by drosspriddle at 5:03 PM

When in doubt envision the ambiance, the presence, the grace which is CORKY from the TV show FAMILY TIES.

Tired. Withered. Relegated to folding laundry as a career at the LAQWEENTA MOTEL.

Ross is all styled up. Looking at real estate. Posting pictures of attractive side walk blooms of decorative schrubs and trees. Ross is turning all Howell. Ross is all responsible and sensible. He just needs a WARD CLEAVER pipe and a suit and tie.

Now. Finally when TRUMP is elected ALL WOMEN shall be placed in supervised HOME ECONOMICS classes. So they can learn properly how to WORK, CLEAN and SERVE their men, I mean OWNERS.

Under the supervision of THE TRUMP WORLD GOVERNMENT all lesbians shall be CONVERTED BACK.

Women. See that hand gesture. That is why EVE sinned first. Woman. She is EVIL.

Look at that photo. Perfect reason for FEMALE CASTRATION. Woman. SHE IS EVIL! SHE IS SIN!

Between 2001 and 2010, the number of women undergoing labiaplasty — a cosmetic operation that makes labia smaller or more symmetrical — increased five-fold. And all this vulva altering could significantly warp women's perceptions of what "normal" or "desirable" female genitalia look like.

Hillary is a very oooooguhlee man

Some women are bothered by the size of the clitoral hood and the clitoris shaft or head (glans). The hood may protrude too much causing the woman to be self-conscious or irritated. She may feel that the protruding hood and clitoris cause a bulge in her clothing or the appearance of a small penis. Clitoropexy repositions the protruding clitoris and reduces the length and projection of the clitoral hood. Clitoropexy is also indicated in the woman with mild clitoral enlargement who does not want to undergo a formal clitoris reduction.

Surgery to the labium, known as labiaplasty, a surgical modification of the labia minora or labia majora, is the focus of growing debate in our universities and semenaries. Secondary procedures often associated with labiaplasty also are discussed. Female genital cosmetic surgery (FGCS) is the fastest and most importantest growing field of plastic surgery, which involves a variety of procedures designed to enhance or rejuvenate the genitalia of gyno-Americans. Types of FGCS include, but are not limited to, monsplasty, vaginoplasty, hymenoplasty, labiaplasty, G-spot augmentation, clitoral unhooding, frenuloplasty, perineoplasty, fat injections, and combinations of these procedures.

FYI: The area just above the pubic region is called the mons. This is a common area of complaint because it can be a site of extra fat. Liposuction is a good option in this area and will reduce the size. Sometimes (especially after significant weight loss), the mons descends and droops. In this case, as lift (or monsplasty) is indicated to lift the mons region and remove excess skin.

The so-called Symbionese Liberation Army and Field Marshal Cinque were CIA operatives; the Symbionese Liberation Army was created by employees of the CIA and California Department of Corrections out of concern over “white radicals protesting the Viet Nam war that want to blow up buildings” the CIA cut a deal for the Field Marshal to “escape” from prison and set up a phony left-wing organization. For his all of his good works, United States Representative Leo Ryan was then lured to Guyana and killed by people working for CIA operative Jim Jones. Jones grew up in the same town that Dan Mitrione was mayor of Indiana. Brad Schreiber’s book sounds awesome, will look into it.

My working thesis: the drop in serial killing has come about because:

1/ CIA and/or U.S. Military Behaviour Modification programs have ceased creating these monsters after the Church Commission

2/ the spread of mobile telephones have allowed us all to operate as personal surveillance units, reducing the opportunities for people to kill multiple victims over relatively long periods of time.

Of course, so-called spree killing has “risen”, but which of those are government run operations (Sandy Hook, Boston Marathon) and those that are organic (Bob Dylan Roof, Orlando) sometimes need to be discerned closely.The only stickler is that at fundamental level the Democrat Party – and the U. S. of A. – are whores after the almighty ‘corporate’ donation. Ignoring that little detail, the USA is now essentially the so-called Symbionese Liberation Army. Are you getting all this Ross?

In this age of narcissism and self-creation, it shouldn’t necessarily surprise you that there’s a demand for surgical vaginal beautification. That's what the next four years will bring.