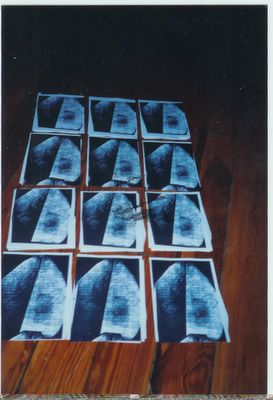 Posted by drosspriddle at 10:41 AM

this one's just one of the pages
from "July Traintrack" - a minibook
of my own writing and illustration
made for JW Curry's project of building
little libraries for the "junglettes"
which are places of overgrowth within
traintrack property where transients
and adventurers would at times camp.
i forget the number - 16, 19, 21, 27,
(i made about 35 then settled on how
many to keep for self and friends
and how many to give curry for his
libraries, which were sealed against
weather in an orderly way, his hoping
that junglette users would be all
as micropress respecting as he
and would restore them to their
weatherproof packaging upon enjoying
them a while. Some likely found
the bottom of a garbage can
quickly, some used for cheap fire,
some probably will not be discovered
for decades. But yes, this all important
repeating set of one image arranged
on the hardwood floor at bathurst
spare room is of my own work and devising. Viewed up close, there's
tons (tonnes?) of tiny tiny print
and handwriting squeezing all kinds
of absurdity, shrunk to a density
then shaped into the housefly alien
mask likeness shown sixteen times there
...obviously.