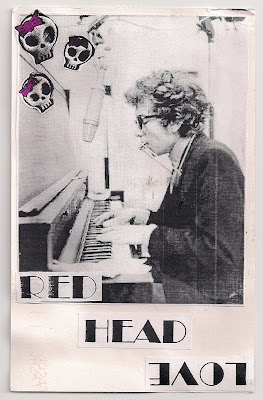 I loved Margaret Hamilton as THE WICKED WITCH in the Wizard of Oz film. I know she was CORA on the Maxwell House Coffee commercial for several years, but it is heart breaking to have to see her now playing harmonica and piano in some jive juke joint for a living. Its so very sad and heartbreaking.

Donald Trump says buy rice anyway?
Huh? What? Who?
Of Course THE WHO are a buy or a deal any day. Their records are getting scarce.

the who sell out?

I just love her perm!

If you gotta play COMMIE, pppplease play JOE STRUMMER and not bob dylan. Far too many losers name check him like cheap wine. If he were a whore his inititals would be V.D.! For god sake he ripped off Woody Guthrie's swagger like a street corner whore. He's the BIG EYED KID schtick painting of music. He's a drag, a well known drag. Me and the lads frequently turn the sound down on him and say rude things. He's grotty. Dead grotty. That's what he is. Just like name checking RAY WATSON. If you've gotta get pregnant with ART create something that isn't stillborn. He's like The BEE GEES trying to remake SGT. PEPPER. He's a LEISURE SUIT. A BAD IDEA from the start. He's PLAYED OUT! He's like a fart in the room. Everyone is waiting for someone to have the guts enough to get up and fling open a window! HELP FRESH AIR! Speaking of fresh air JENNIFER KOSHAREK is opening a new gallery with REAL ART from REAL ARTISTS! Yoko Ono step aside! The real HAUTE COUTRE' has ARRIVED!

Truman HAIGHTS heem more than you love trying on your mother's panty hose when she not home.

Think mahn. JJJJOHN LYDON! P-------I--------LLLLLLLLLL! Listen to CAREERING and POPTONES and ANNALEISE! Right Now! It shall be your GOOD MUSIC DISCRETION reset button. It'll be like finding BLUE CHEER or CREAM for the first time. If you don't at least listen to some good RUTLES.

STANISLAV is played too.

Hanging onto bob dylan is as bad as JANICE SOPRANO being pissed because a one legged Russian whore stole her mother's MARIO LANZA albums.

Bob Dylan is even more STALE than

and ZAMFIR MASTER OF THE PAN FLUTE

The next best thing to Bwwwwabbbbb dylan.

bob's a troubadour whereas boyd's more pop philosopher than anything-- its hardly a fair comparison. both have their merits but i find myself spinning blood and flame more often than highway 61 revisited. (furthermore, standing in two circles is far and away a better read than tarantula.)

Bob's not a troubador. He's just a


Listen to POPTONES by P.I.L.

or all of
P.I.L. Second Edition.