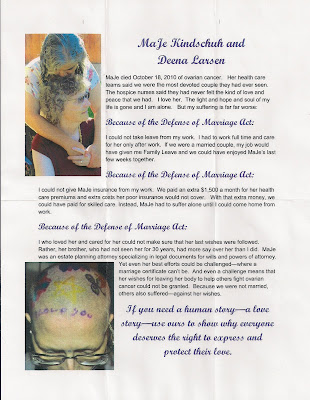 In a system that promotes babies being sucked out of their mother's wombs love is a JOKE. We live in a world whose god is not love but meanness, cruelty and destruction. Religion and politics team up to issue what LOVE IS and what LOVE IS NOT. Its designed to make people hate and blame god for everything shifting the responsibility from MAN. In the future caliphate world FEAR shall replace all emotions. Man is the nuclear animal. The suicidal animal. Man is the most vicious animal of them all. That is the real TRUTH. Michael Jackson said look at the MAN in the mirror. Look through a glass darkly and you'll see who you are. What you are. Charlie said, I'M A REFLECTION OF YOU, I'M WHAT YOU'VE MADE ME." But you know what, LOVE is the only thing that can't ever be destroyed. And that is what GOD is.

yer not, uh, anti-abortion are you, Truman?

If we are gonna have respect and dignity for same sex couples and their rights are valid, we need a BODY that isn't going to kill you while you are trying to form for nine months like a BISCUIT EATER dog getting in the chicken house eating all the eggs and chickens. NAZIS and RED CHINESE love abortion. They call it BIOLOGICAL MEDICAL WASTE. So if you aren't going to respect COMA people or ELDERLY bid ridden people and babies then the people living in between with issues their bets are off too. A dying chemo sympathy is just as worthy as a baby not getting sucked out with a razor vac forcep. You can't expect people to feel SELECTIVE SYMPATHY, unless you support SELECTIONS dohktuh mang-uhlay. Remember every abortion clinic has an incinerator.

Baby murder is baby murder. Buy off baby mommas with a nine month rest in a posh resort and a free new Toyota. Adopters can pay for it. Solves the problem. Everybodys happy.

Truman, you're not homophobic are you?

The more homosexuals in the room the better. Less competition for the women. A preen-yus is the injector of seed. Seed in the air is competition for the EGGS. Testosterone all around is like being in a boxing ring. I am an EGG MAN goo goo gah BOOB! Homosexuality is a competition reducer. Uncle Arthur on BEWITCHED also unnerves people who don't understand him. The more flaming homosexuals around the better. Without homosexuals MIAMI would be a nursing home. The world needs lots of BOBBY TRENDYS. My question to Ross is why does his brain more frequently than other subjects evoke homosexuality. That is the real question to be answered. When one is dreaming of EGGS you don't evoke KILBOSSAS.

Truman, you're not racist, are you?

Truman, you're not misogynist, are you?

YOU might forget some of the insane things you say in your newsletter, but I don't!

Ross. YOU ARE GREAT! I am so happy to give you all the answers YOU are looking for! To you TRUTH is AMBIGUITY. LIFE is DEATH. RIGHT is WRONG. The extreme liberal mind is the TOTAL POWER. Everything is STRATIVARIUS VIOLINS and DECK CHAIRS from the TITANIC thrown in with ABORTED BABIES to feed its fire. Ross YOU are all you should be. THE GREATEST among all the extreme leftists. CHE GUEVARA IS BILL O'REILLY compared to you. Thank you for allowing me to be the most notorious DEVIL of the left. You are wrong about one thing. I am not a racist or a misogynist because I DESPISE EVERYONE EQUALLY. You should label me a MISANTHROPE. But still that doesn't fit well because I like crippled people, retarded people, the unborn, and the weak, elderly and dying. I guess maybe I'm an ICONOCLAST. Throughout my life bullies and rednecks called me a SISSY or a FAGGOT or both. Even women who KNOW ME call me an OUTSIDER. Perhaps I am THE DEVIL. SATAN.LUCIFER.BELIEAL.LEVIATHAN! Maybe you should just call me PERDITION. I'm flattered that you admit that my Newsletter has been such a lasting effect on your intellectual memory that you don't forget what it says. Therefore I must have really written something special. SHEMHAMFORASH! HAIL TRUMAN!

"There's no such thing as bad press," Truman, is there?

Truman, your arch enemy was just telling me how Boyd Rice turned his bad press to his advantage...

Don't you have a blog of your own tho, Tru?

Maybe leave me and my bleeding heart pals in peace for a while? Huh?