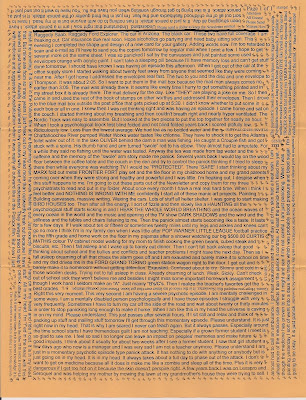 Truman Bentley Jr.
Posted by drosspriddle at 11:30 AM

Truman was on AMERICAN IDOL last night singing PURPLE PEOPLE EATER. He got booed by Randy. He looked like some crud from BOSTON with that goofy yankee accent he was using. Truman YOU are not ANDY KAUFMAN!

Truman everyone knows you are not a RIGHT WINGER! We know YOU are a TOTAL LIBERAL! We know YOU just like playing tough guy. You are just a PINKO COMMIE SISSY! TRUMAN IS A SISSY! YOU BIG GIRL!

TRUMAN is no idol! He I S a GRAVY IMAGE,! Thou shalt not make unto thee a gravy image, nor any manner of sauce, of any thing that is in heaven above, or that is in the Georgian earth beneath, or that is in the water under the Georgian earth; thou shalt not bend spoons down unto them, nor serve them; for I the TRUMAN thy TRUMAN am a jealous TRUMAN, visiting the iniquity of the fathers upon the children unto the third and fourth generation of them that hate Me! Look on my works, ye mighty, and despair!

Why ya'll got tuh jank on dem BETTY HOSE?

Truman's chickens have come home to roost. It's a cold cruel world isn't it? Confess! Feel the healing powewr of the inquisition.

Ross. I perform SATANIC RITUALS against anyone who even looks at me wrong. I have a TELEPATHIC MEN WHO STARE AT GOATS POWER to bestow terminal CAN-SUH to all who do not love me and worship BABY STEWIE the one and only me, TRUMAN BENTLEY JR. I have psychic abilities and I have been hand selected by SATAN and have his total 24-7-365 SOVEREIGN PROTECTIVE LOVE. The DEVIL loves ME and his POWER is my FORTRESS. That's how I CONTROL WORLD ART and people's brains and souls. Bwwwwahahaha!

"MY NAME IS LEGION FOR I AM MANY. I AM THE ORIGINAL DADA FLUXUS-IST NEOISM"

Take a shower. Then a tub soak. Then dry. Once dry have a friend carefully wrap your entire body with Newsletters. Cut out eye, mouth, ear and breating holes. Wrapped in The Newsletter mummy style your mind shall reboot. You'll actually be able to think straight again. Your health shall improve. You'll be drawing PLAYBOY BUNNIES instead of Roy Watson bunnies. You'll have GOOD SENSE.

The World's ONLY Art Saviour

Truman, you know how I hate when you talk about Satan...