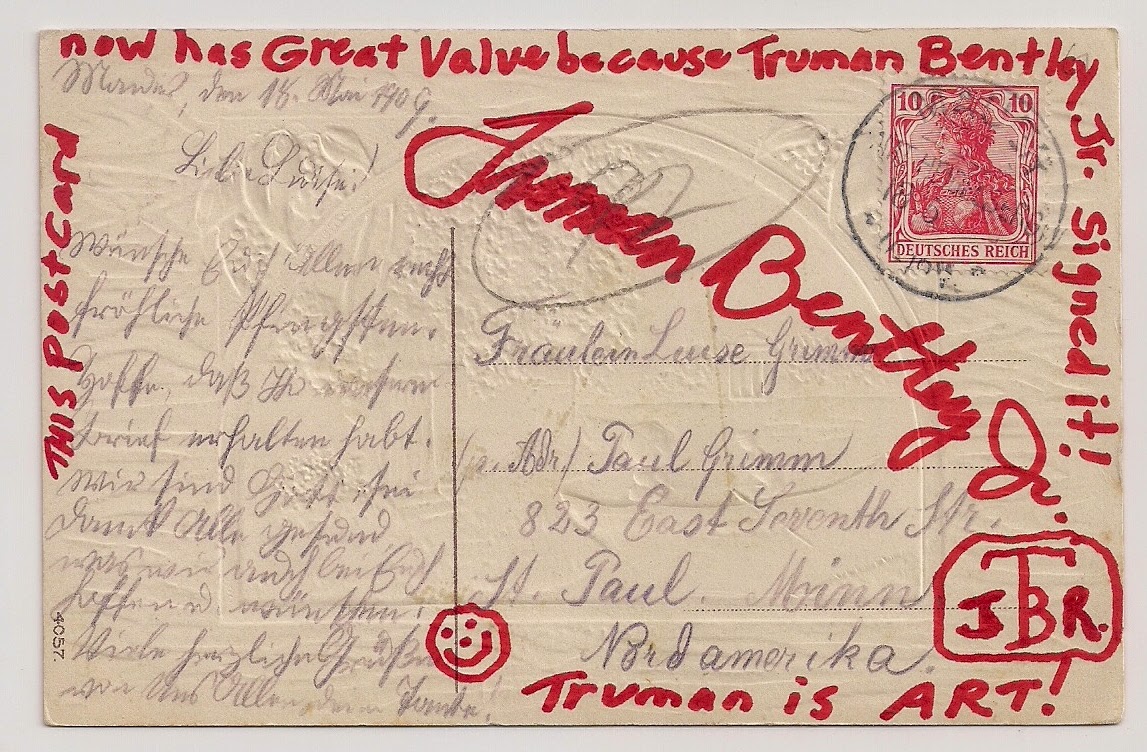 Ross, I will give you a bitcoin for that postcard. I have to have it.

Truman is the greatest value! Not just great, GREATEST OF ALL TIMED SPACE!

Fräulein has seen a recent revival in recent years as a vogue term, especially in popular culture.

Bitcoins are sooo 2012. Send me a yankee dollar and you can have it back.

10 crispy leprechaun toenails for the postcard

Yankee dollars are a tool of Martha Stewart, the ice witch of the North.

What's so great about Fräulein? Give it a rest, people!

Ross. The odor from the Calgary paper mill is like the side molars of FDR.

Truman is the Supreme Art God. This is not a matter of opinion. There is no agree or disagree. This is the consensus reality we live in now. To disagree is to ask for a visit from the brain doctors. Truman is FAR SUPERIOR to notorious ass-clowns such as Jesus, Mohammed, Einstein, Yo-Yo-Ma, and LeNardo Da Vinci.

"Timed space is a hoax perverpetrated by the liberal pervert elite in Hollyweird. No one would watch their abonimable trash films if not for the perverpetration of timed space." - Rash Limbbag

liberal is good. not to be confused with choad. remember that. so sayeth Truman Bentley Jr.

The tumble weed of Phil Spector's hair had the answers. Now it has been shaven the Holllywood messages are unclear.


sure blame internet for people lower iq. In past air plane and cars was devil next radio and tv now is time for internet was is intresting new research show that playing game for example you can improve atention vision .... Also when i start using internet my IQ improve too.﻿

The past recedes into myths legends.

A term used by others, usually being suburban "gangsters", whose lives are absolutely and undeniably defined by what others think. These people "rumble" often and think of themselves as original and/or indestructable. People that use the term "haters" are the lowest stage of the evolutionary scale. They bleed the fastest and have thought processes similar to that of a mentally underdeveloped cat.
"Why you hatin' on me?"
"These haters be up in my grill!"

art is the whine meow of all who can't. Art is a form of SPECIAL EDUCATION for those who can't. Minds without. The flaw. The mind lacking. Good sense. Tacky. tacky. tacky. yes. ART is the loony. a form of very-tourettes asemic like the people hunched over the counter in the convenience store mart scratching on lottery cards. art is a three letter word for failure.

slippery and hot steaming, my post fast food coffee and soda meal made room for biowell-bowel melange' is art. creating paste board special containers to leave about for gift prizes, little tokens of my healthy constitution. my patte'. it can be your toupee'. people. love my bowel relic art sculptures. pose them. mold them. love them. no longer are they flushed. i leave them here. i leave them there. because i am a dedicated follower of flushing. bowel. bowel.

Shape shifting human-lizard hybrids.
Generally heads of state, captains of industry, members of secret fraternal or black ops organizations. Not to be messed with.

When we were kids....we called listening to the train catching the train. How this work: In a distance you can here the train coming so you pretend like you get onto the train...then you lay in bed very quietly until you cant here the train anymore by then you should be asleep. Good night all train listeners!!!