this was just before the helipad 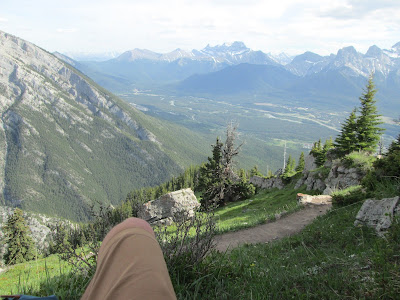 Posted by drosspriddle at 1:15 PM

Any chance that view is on the Alcan Highway in Yukon or British Columbia. If so I have a photo of me standing by a spot that looks almost identical.

Roos. If I was rich I'd fly you to Florida. Rent a 1960's hard top Ford Thunderbird. With no air conditioning. I'd put you on the back seat. Have Morgan Freeman or Forrest Whitaker riding up front riding around drinking beer all day. Let you breath Morgan Freeman. You'd have your ass on that helipad so fast trying to get back to Bald Ass Mountain you wouldn't know what to do. Shaka Zulu Ross Priddle. Shaka Zulu.
I love The South. I love THE SOUTH! BABY!

You should have both your legs showing and wear a big wrestler COD PIECE. Now that would be art!

At the next Flux party serve MIXED NUTS passed around in a COD PIECE.

Have Morgan Freeman have a doctor remove his little facial moles and put one in each hole on a saltine cracker filling it up. Serve hor de vors on it.

No, that's not the Alcan Hwy, that's just the road between Calgary and Canmore. It's still gravel but we's saving our Canadian pennies to get it paved some day. Yessir.

Ross. Fuck FB. Fuck social media. These computers are out of date every six months. And they run to buy more and show off LOOK WHAT I GOT. These in debt circle jerks sipping nine dollar lattes feeling like shit reading ingredients with all their APP GADGETS. No wonder they can't create art or speak in front of a group. They aren't WUNDER VOGELN they are WUNDER SCHMUCKS. Man children. They know trivial pursuit but not one of them can come up with one god damn original idea. And if one does they all get jealous and hate that person. Well ask Woody. He can tell you all about how all these big deals are nothing but MRS. NESBITTS. To INFINITY AND BEYOND. Bull Shit. They are all dependent on MOMMY AND DADDY. Snot rags. Jack towels.

Ross. Next time you get spaghetti. Take your fork and seperate out on your plate a little piece of gristle looking meat the size of a bugger. Put it between your teeth on the right side flexing your jaw muscles as you SCQWITCH it around between your teeth. Imagine Morgan Freeman's little facial moles.

Get a message to Thompson. My computer is fucked up. The AOL page is all scrambled. So I caint emails nobody. So PAPER MAIL me peepuhs.

You brag too much, get humble!

Ross. It is hot here. Like the jungle swamp in the film PAPPION Spider things and worms like snakes. Bugs running out from under everything. Raked up two garbage cans full of Magnolia Tree leaves. I smell like ARM PIT.

Ross read about the 1960's TV show STRANGE PARADISE. It might be on YOU TUBE.

And now. REAL POETRY. A poem by THE GREAT BOYD RICE!
Entitled

Ross. I saw a documentary on Boyd Rice. Boyd Rice was working with DADA and SURREALIST revivalists in the 1970's. I think Gaglione was in that DADA circle then. Ask him if he is familiar with Boyd Rice's work in Surrealist and Dada art.

Ross wrote OBERSALZBURG and got that big travel poster he is sitting in front of that he took that SELFIE with. Ya'll all dumb.

Okay. These god damn computers hurting my god damn eyes. Forgot that god damn pass word shit to check email. So fuck it. Ain't gonna do e-mail no god damn more. If some cock sucker mother fucker wants to talk to me they gotta write a god damn post card or a letter. Ain't gone use no god damn computers. Or no cell phones neither. I'll type in the number and dial. ring ring. Hello. Alright. Good Bye. Then hang up. No texts. No messages. No photos. All I am gonna do is dial a number and talk. All this shit is why there ain't no real artists. Sitting there clicking on buttons. Sneaky rude mother fuckers. Create art. Not bull shit. Reason Ray jumped off that god damn bridge is all you mother fuckers are full uh shit. Ya'll caint even suck uh dick right. Your mommas and daddys sure can though. Fuck this shit. The only real artist was god damn RAY. Now you mother fuckers can't take his name out of your mouth. Not one of you would suck his dick right while he was alive. Bunch uh cunts. Hey. YOU AIN'T ARTISTS MOTHER FUCKERS! You all are just fucking fake mother fuckers! Put a few dicks in your mouth and SUCK HARD. Then maybe then you'll all have something you might be good at. AND GET A GOD DAMN JOB! You are all fat as shit. And you women. Ya'll are tacky as shit and ugly as hell. You all look like a bunch uh shop lifters. That is why the security code is announced over the intercom every time your ass steps foot in TARGET. QUIT STEALING SHIT!

Please don't take offense, he can't help typing all that profane stuff above, he is just doing what I command him to do. I tell him what to do, say and type by using my pet dog as the go-between.
Thanks in advance,
Mr. Samuel Carr
316 Warburton Avenue
Yonkers, N.Y. 10701

Again, I am sorry please don't take offense, he can't help typing all that profane stuff, he is just doing what I command him to do. I tell him what to do, say and type by using my pet dog as the go-between. I have alot of pity for this poor soul, in fact I treat him like a son. He is my little "Son of Sam."

Hey, he just called you a raving, typing, David Berkowitz inspired psychopath (with a deep oral fixation, no doubt.) But it does brings up a piece of art history trivia, does anyone know what the alleged connection Robert Mapplethorpe had to the "Son of Sam" case?

Anonymous said...
...cock sucker mother fucker...mother fuckers are full uh shit. Ya'll caint even suck uh dick right. Your mommas and daddys sure can though. Fuck this shit. The only real artist was god damn RAY. Now you mother fuckers can't take his name out of your mouth. Not one of you would suck his dick right while he was alive. Bunch uh cunts. Hey. YOU AIN'T ARTISTS MOTHER FUCKERS! You all are just fucking fake mother fuckers! Put a few dicks in your mouth and SUCK HARD.

One thing about this post is that it seems to infer that Ray Johnson did not receive museum and gallery representation when he was alive and in fact he did. After his death, they could not believe how much money he had left behind. I am not saying he was a "sell out", but instead being realistic. After all he was known, appreciated and collected by many during his life. His estate is in the hands of his dealer Richard Feigen, 34 East 69th Street, New York, NY 10021. You don't just happen to fall on top of a mountain, Ray Johnson got there via much work. All of you who were able to correspond with him when he was alive are very lucky and I envy you.

Samuel Carr indeed lived at: 316 Warburton Avenue, Yonkers, N.Y. 10701 during the Son of Sam killings. Mr. Berkowitz wrote to him several times about his loud barking dog, before harming the dog himself.

David Berkowitz's last killing was alleged to have been filmed in connection with a satanic cult. That snuff film was an alleged connection Robert Mapplethorpe had to the Son of Sam case. Mr. Berkowitz years after the killings said that he was a member of The Process Church (of the Finial Judgement), which he considers a satanic cult and that they were involved in the killings that he took all the blame for at first. He says, he did not do all the killings. Witness identifications at the time do support this claim of his. Mr. Berkowitz claims that the Carr family was involved with the cult. After Mr. Berkowitz was jailed for the killings, a son of Sam Carr who Mr. Berkowitz said was very involved in the cult was murdered in a still unsolved case. Was this done to keep him quiet?

John and Mark Carr were the sons of Sam (Carr.) David Berkowitz said he was involved in a satanic cult with John and Mark. At first they killed dogs, but soon human blood had to be shed.