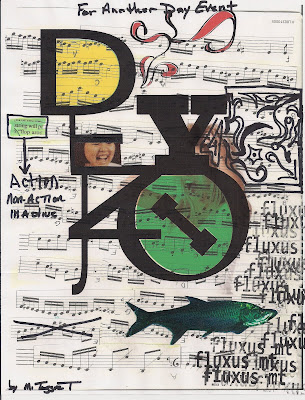 Can't remember what it was. Trying to write asemic style. Oh well. Anyway

When I was in the nineth grade this boy in MODERN MATH class used to repeat over and over again a phrase until we all got detention if we said it. He would eat lots of NOW OR LATER candies and get hyper. He'd say, "EAT RAW FISHES NOT PORKIN' BEANSES", over and over again. It was sort of Tourettes Asemic. I had this friend who had a grandmother with a vintage big pre beta VCR full format TV studio player. A TV station type before home players. She had Linda Love Lace, Jaws and Gone With The Wind. They had to be recorded at a TV station. Back then the only way to get one of the huge tapes was through a secret TV station worker. She thought she was something being the first on the street with a VCR. But it was before they were called VCRs. As I recall it was called a VIDEO TAPE RECORDER. Her grandson Danny would rewind the drunken around the table scene before the shark ate the boat scene in JAWS where QUINN or QUINT in his army jacket described a Marlin. "IT BBBBLEW MIH RITE OH-VUH!". If you get Jaws on a DVD find that scene with Quinn or Quint saying "IT BLEW MIH RITE OH-VH!" Danny would screech that phrase out all day driving his grandmother crazy. It was very Tourette-Asemic. Just like the guy in math class. So tell all the world to say "EAT RAW FISHES NOT PORK N BEANSES", and "IT BBBLEW MIH RITE OH VUH!" Its crazy. A new phase in Asemic Writing everyone should take obnoxious phrases recalled from childhood days and write a story about each phrase. It could be a great zine. Kobb says he is almost finished with his latest Lab zine. Elizabeth Legrand sent some trading art cards. Nick sent several envelopes with random clipping gibblets. Cohen in Japan sent another fold out pass and add poster. Erik D. sent a noise concert he held in the Black Hills using crazy electronic gizmoes and speakers. He drove his SUV out into the middle of nowhere and started recording himself creating crazy echo noise in the wildnerness silence. Crazy. Its on a DVD he sent.