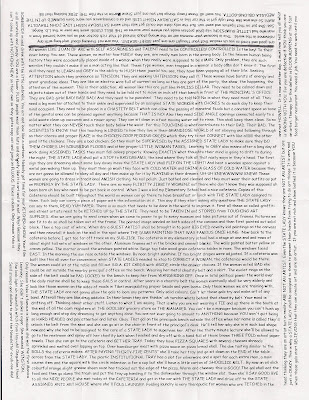 Five Newsletters of super intense lunacy are ready to be printed. But I am too lazy to go print them. By tomorrow there may be five more created. The space aliens have me on beer and sandwiches. Eating and drinking and writing. On a roll of crazzzzzzzy writing. I sent a envelope full of select bits from followers who sent in over the last week. You call it MAIL ART TOBY! I call it jibbering-scrawlings from NON HOWELLS.

Transmissions from the extra-terrestrial Space Aliens are detailing the way the CLOTHES shall be for all the humans of the plannick who shun jobs at the fast food BURGER FINK style rester-raunts. People need invisible puppet strangs tethered to them called DO'S and DON'TS. The power of DO shall teach them the joy of late night rester-raunt closing floor mopping. Thompson read the transmissions. He repeated them in his recorded lectures on the subject. THOSE OF THE NEWSLETTER CULT HAVE GOTTA WORK UH JOB! The Space Aliens say HUSH THEM JOWELS to all who think they are the LITTLE ENGINE WHO COULD when in reality they are the LITTLE ENGINE WHO CAN'T. The Space Aliens have the names of every person in the world. They sprinkle the DUST which makes people an ARTIST or a LANDSCAPE TECHNICIAN. The Space Aliens have the INVISIBLE SILT VAC. They can invisibly draw up all of the CREATIVE IDEA TALENT DUST. Once the dust is gone the artist can't so much as muster the creativity to draw a stick figure. The same with the LAWN TECH. Without his dust just like KARL CHILDERS he can't figure out the lawn mower needs some gaiss. The Space Aliens control thought and creative energy. They rule all DNA and can flip DNA-buttons/switches to disrupt the PSYCHIC INPUT which cause MEDULLAS TO THINK UP ALL CREATIVITY. The Space Aliens say HEY YOU! WHAT'S THAT SOUND? IT'S THE HEAVY HEAVY MONSTER SOUND. THE NUTSIEST SOUND AROUND! ETC......ONE STEP BEYOOOOOOOOOND! It leads to MADNESS! Space Aliens control human sanity and creativity and one minute one can be on the road/the path to becoming a respected artist. The next second just a babbling looney toon. Also the Space Aliens can cause eyes to go COLOUR BLIND. This means all is Black And White and so even if the Space Aliens haven't used the SILT VAC to draw up all of the talent, The Space aliens leave the artist Colour Blind requiring all remaining art to be in Black and White color/lack of colour only. The Space Aliens are invisible and they can say WORD UP! The secret magick word into the ear of a bus driver causing him to go temporarily blank. This can cause the bus to explore a ravine or a pedestrian. The Space Aliens look like the guy with the round glasses in the film DR. ZHIVAGO. Like Martin Short's character with the cigarette from the 60 MINUTES parody skit. Beard hairs create static. This electrical energy leads to a disease called BEATNIK. Once infected with THE BEATS one cannot get feet into shoes or hands to hold a pair of TOE NAIL CLIPPERS. More later.