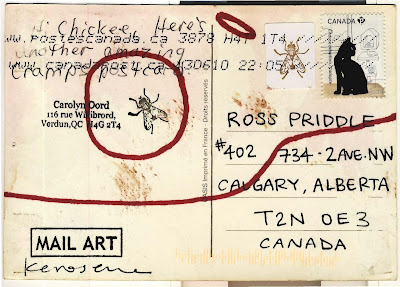 Ross Priddle. What the hell is mentally ill wrong with these freaks in the mail art world who obsessively keep drawing their modified versions of the ray johnson rabbit. They are nuts. First, that rabbit is stale and lame. Second. ray johnson is barely a foot note in the art scheme of nonsense. And because the rabbit is so lame if ray was alive he'd vomit if he found out people are making that piece of shit rabbit doodle his legacy. Third ray would absolutely despise all these people and their weird ass bullshit with that god damn rabbit. Also all the founders of the FLUX/FLUXIST art movement thingy would god damn vomit at how all these lame as hell weird as shit mother fuckers are obsessing over the bowler hat. It is now nothing to do with what it was originally. All these dried up old mentally ill old hacks of phlegm getting together to ring bells and read bull shit off cards with mixed pantomine shit ripped off from MIMES. Nobody god damn likes mimes either. I wish they'd adopt the Penny Farthing bikes and unicycles to add to their skits. The uncoordinated freaks might at least fall off and get concussions. Maybe that would knock some sense into them. There are very few original people doing anything original. Real artists are what they are and don't give a shit like how Amedeus was portrayed in that 1980's film. All the so called ARTISTS that call themself that are like that cunt Sally-yare-ray in the film. Nothing but a fucking mental ass bitch pissed because nobody likes his shitty compositions. Watch the Amedeus film. It is funny. These so called ray rabbit mother fuckers need to KNEED their own shit into biscuits to let dry in the sun. Then they should use them as charcoal bruchettes to cook their food. They might get off inhaling the fumes from their own shit. Ray johnson would puke at all these damn rats feeding off him and turning that fucking rabbit doodle into a personal anal affixation. ray is vomiting in hell right now.