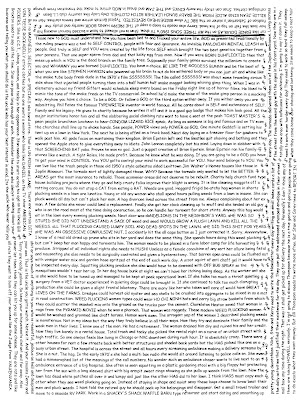 This is called DILDONIC ART.

Christianity and especially fringe christianity, but christians as a whole are participants in a form of dangerous MENTAL ILLNESS. Making decisions on a fantasy god is insane. Really now. GOD IS MY CO PILOT? They gotta be kidding. No. I don't think so. In the future all bibles shall be recycled to make fast food drink holders and sanitary product tampon applicators. All christians shall become property of the state and placed in labor camps for their crime. Freedom is from religion. Religion is slavery!

Awaken to the NEW RELIGION CALLED SELF! For poor is the man who's pleasures are dependent on the permission of others! Read the Newsletter for it can SAVE YOU! It can peel off the scabs and annoint the wounds from a life time of submission to brow beatingss from mainstream religion's gobble-dee-goop and herd mentality conformity! Read the Newsletter! escape the clutches of mediocrity and "top of the head scalp odor". Itch our shampoo deep in that scalp! HEAR THE WORDS! Write TRUMAN BENTLEY JR. 3219 CARDEN DRIVE COLUMBUS GEORGIA 31907-2143 U.S.A. Send a few dollars for printing and some postage stamps.

WORSHIP MONEY! For it is the only TRUE GOD! It SAVES! It can do anything you need done in life! From buying toilet paper to a steak dinner! Embrace the dollar for it can buy you GOLD! Read the Newsletter every day and be saved! Send a few dollars for printing and a few postage stamps. Write today! Ken and Larry were kissing! Sally and Lenore were rockin' and rollin' on the couch with matching sweaters on! They were not accepted by the masses and the puritanical nonsense of all mainstream religions, so they read the Newsletter and strengthened their resistance to the baloney god of all mainstream religion monkeys! Mainstream religion is a disease worse than AIDS! Verrrrrp! did that priest just rip another butter milk sulfur fart? Smells like MILDEWED COTTAGE CHI! Stunk the room up! Dang he staint! Read more! Send a few dollars for printing and some postage stamps! Send to TRUMAN BENTLEY JR. 3219 CARDEN DRIVE COLUMBUS GEORGIA 31907-2143 U.S.A. And remember holy water is good to remove territorial cat pee skeet from car tires! It is also good to pour on ant beds and sprinkle on COCK-UH-ROACHES! Hey! Hey! Heyyyyy now. Look in that mirror. That withered turnip is YOU BABY! YOU! Cause you been listening to jive turkey priests in the pulpit far too long. No wonder your brain is breaded, battered and fried!

The iambic pentameter of Truman's words are hypnotic and sensuous. HE IS YOUR GOD! LOVE HEEM! WORSHIP HEEM!

Receive his THICK pile of Newsletters!