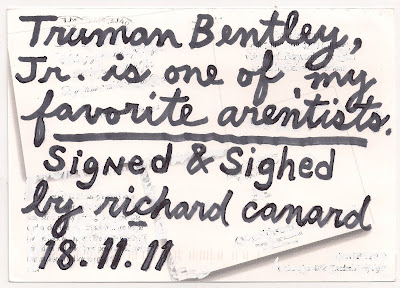 Q: How does TRUMAN BENTLEY JR. feel about artists?

Q: Is TRUMAN BENTLEY JR. a man of faith?

A: TRUMAN BENTLEY JR. believes in himself!

A: TRUMAN BENTLEY JR. is straddling the fence on this one, he just won't commit to a position.

TRUMAN BENTLEY JR. cannot be a CHRIS CHIN. Because he is not an asian. He can't be a CHRIS GRIFFIN either because he is not extremely fat and bloated like the person who wrote all of the above. Remember. If you are compelled to shove more food down your hatch, just chant the mantra.

THIS IS NOT THE FOOD FOR THE POOR PEOPLE.

Christianity is a cult. A self righteous cult. A cult of finger pointers. The only thing Truman Bentley Jr. has ever committed himself to is the mental hospital, in part to the consternation and self loathing created by a life infected with christian theology and christian people. Jesus was the only Christian and they brutally killed him as fast as they could. Don't forget that. Then ask yourself WHY?

TRUMAN BENTLEY JR. is creeped out that someone would imagine his legs and bottom straddling a fence.

IS TRUMAN BENTLEY JR. A CHRISTIAN.

Perhaps he took the finer points of the teachings and applied them to his natural propensity toward compassionate weakness. Notice anyone who actually applies kindness gets the rack.

WRACK, RACK, RHACK, how do you spell it.

No one likes anyone who tries to believe in themself. Those who don't view it as someone trying to make them get up and COMPETE WITH THE JONES'.

So, is TRUMAN BENTLEY JR. a Christian or not? I'm still not sure.

A CHRISTIAN OR NOT.

Religion taught in early childhood is like a fetish. Whatever fetish you acquire early on you frequently indulge it throughout life. So if Truman expresses Christian hints it is sort of like he is indulging an Angora fetish.

Truman can't get no women. That is why he likes men and is getting a sex change operation to look like actress Tori Spelling.

This man's handwriting looks like a Ray Bradbury wrote it with one blind eye and the other squinting through a thick lense.

There, I said it. TRUMAN BENTLEY JR. is sexy.

TRUMAN BENTLEY JR. ignites the flames of my desire.