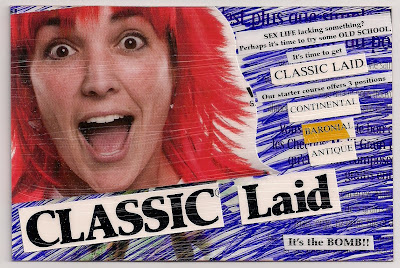 Whimsy and Colour
Posted by drosspriddle at 10:58 AM

So that's how the
WENDY'S HAMBURGER RESTAURANT GIRL looks when her pig tails are undone.

Ross. I had been building canvasses all day. I ate some left over turkey on bread and took an afternoon nap. I dreamed I was on the ALCAN highway and you were pinned in an old Toyota under some logs from a logging truck. You were yelling directions for me to run back down the road to get a chain saw to remove the logs. It was crazy like in THE GREAT WALDO PEPPER when that guy was trapped in that plane. Anyway I ran back in the dream and woke up in a panic. Anyway just thought I'd let you know. My e-mail is messed up so I thought I'd post it rather than wait until the e-mail straightens out. Never eat a turkey sandwich and take an afternoon nap.

The WENDY'S RESTAURANT GIRL is yelling

For Men and Women. A new sentchyuhl idea. Armpits could be the new orifices. They already grow hair and sweat oil musk why not sew a faux kangaroo pouch vagina replicant under each arm with a plastic tube canal that inserts back into the area under the collar bone. Mucus secretion glands would be a real turn on as the under arms got wet ready for HHHHEY! Ah bwaybuh! Suck my pits! And looking all brootuh-fuh after my sex change operation to look like actress Tori Spelling, how could anyone resist!

After the diabetic foot amputation surgery today and the foot is washed and placed in the PIG FEET jar filled with Tequila, Truman shall begin advertising the AUCTION for the foot. Truman is having a chrome cloven foot stub cap made to go over his stub. The funds from the auction sell of the foot shall pay for it. TRUMAN BENTLEY JR. has a cloven hoof! Just like PAN!

I fell asleep around 1:00AM in my tent down in the woods by the creek campsite I built behind the office supply store between a neighborhood and the I-185 bypass. Around 2:00AM I heard some clinking. I peeked out of my tent and there near the fire were two little men about five inches tall with red beards opening my bag of trail mix. They were loading the peanuts into a sandwich bag and they were leaving a pile of raisins. I watched them until they walked away into the darkness. One had a spring loaded stick like a spear with a .410 shot gun shell attached. I guess this is used if a bird of prey or a varmit attacks. This explained a lot. Late at night one often hears gun shots in the directions of patches of woods in urban areas. It is the LITTLE PEOPLE! The WEE FOLK taking care of business. Now when I am sleeping and hear a shot I'll never be the same. Because I know of the LITTLE PEOPLE. They did have red gnome beards. But they could be extraterrestrials. Many people do not realize this but a space craft could be encased in a huge block of ice so it would make it through re-entry. These little people could travel in ships encased to look like comets. Keep this information TOP HUSH. The Little People do exist. Richard Gere was not gerbiling. He hired a Little Surgeon to perform prostate surgery to remove a tumor. They can go inside with a small laser and Aqua lung and remove tumors and sew up using degradible sutcres.(STITCHES). Richard Gere was sworn to secrecy so the gerbil story was a cover story. It is all true.

Theo. Your making fun uh my report card issue of your Canadian bacon humour magazine thingy arrived today. If you get mail from U.S. readers who have's postage uncancelled on them, cut the corner off with the stamp and send it to me. I know a goon who collects used uncancelled stamps for his stamp collection. He puts the stamps in the book and writes reflections about his day. He is a weirdo but pays ten cents for each stamp. I can sell them to him. The change adds up and then I can buy new stamps to send THEO all the backed up addressed to Theo mail awaiting stamps. If I had green to buy stamps Theo would get lots of great Newsletter reading. TRUMAN BENTLEY JR. the only god.

Are they UFO whimsey?

Ross Priddle. Brush your teeth. Get up. Get to work on Bentspoon. You can't be Andy Warhol schnoozlin' all day long. You sleep too much. Do you think Andy Warhol could run a factory scnoozlin' all day long. Get working on Bentspoon. NOW! RRRRIGHT NOW! The NEOIST ASEMIC WORLD OF OVERALLS SAYS WORK! YOU CAN'T BE NO PROLETARIAT POOTIN'IN THEM COVERS! GET TO WORK ON BENT SPOON! SEAN CONNERY WOULD! THAT IS WHY HE IS A BETTER JAMES BOND THAN ROGER MOORE!

11 posts. Wow. Truman, I stand in awe of your (is it caffienated?) prowess at (is it wordsmithing?) making marks with a keyboard.

ps.
I have no stamps.