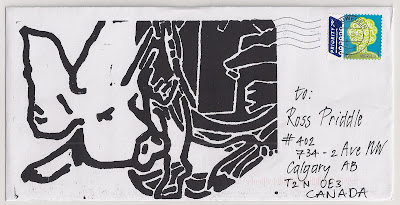 R. Priddle. You do not post enough stuff on here each day. That is because you must be poor.

The pig should be the symbol of mail artists who are not homosexual. The homosexual motif of the RAY RABBIT expresses the bond of gays in mail art. The gay rabbit is perfect as a LET YA' KNOW emblem. But all of the other mail artists who are not gay or not gay yet, the couch potatoes, the slobs, the ROU-TUND should adopt the PIG as the emblem that says I AM. A greeting at the flux events should be the OINK, SQUEAL, or just a yell of ARNOLD ZIFFLE!

I was at a thrift store. It has a gritty cement floor. Some LPs came in. Tons of obscure rare recordings. Strange MAMA CASS Lps. Etc. Rare Rolling Stones. etc. I sat on the floor and carefully started going through the piles of records. There was one rare BOB DYLAN Lp. Like it had been in a cabinet model record player storage slot in some living room for forty years. Carefully I slide the record out. The shiny label and vinyl was brand new. I took the vinyl and placed it under the stack on the cement floor as I looked through the records. Making sure it was scrubbing hard on the cement and grit. After a while I flipped the record over and did the same on the opposite side. Eventually I found a Perry Como album cover with no Lp inside. Here I placed the Dylan Lp. After looking through the Lps I placed the empty BOB DYLAN album cover on top of the stack. Maybe a fan shall buy the cover to frame on a wall or hopefully reunite with the correct Lp off EBAY needing a jacket. Or maybe the workers shall throw away the album covers missing records. This was wonderful. Wonderful I tell you! WWWWONDER-FUH! "For the tines they are uh ccccheen jin!" (*It had pristine colour on the Lp label and the vinyl had museum quality flawless shimmer in the light. Now what did the sticker say on woodie guthrie's gee-tar? What did the Blue Meanie say to GLOVE in The Yellow Submarine movie? GLLLLOVE, GLOVEY, WHAT DO YOU SEE RUNNING IN THE DISTANCE, A BOB DYLAN LP. YOU KNOW WHAT TO DO.")