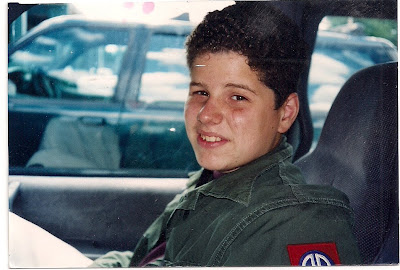 David Stanley Aponte
Posted by drosspriddle at 10:49 AM

The Newsletter is soon opening an office in MANHATTAN. NASDAQ shall soon post stock options. The vast presses also are printing NEWSLETTER PRAYER BOOKS in Thailand. Indonesia and Burma. The INDIAN STOCK MARKET is soon to post the holdings of the Newsletter owned HADJI RUG COMPANY where small hands twist fibers to create wall tapestries and large rugs for Corporate Swanks! Capitalism is WALLSTREET! INVEST in Wallstreet money power! Read THE NEWSLETTER EVERY DAY! When the NASDAQ posts the stocks, sell the gold from your momma's jewelry box to buy shares! THE NNNNEWSLETTER! THE NNNNEWSLETTER! THE NNNNEWSLETTER!

He looks happy and well adjusted.

Is this your girlfriend's kid?

It is a photo of
DAVID STANLEY APONTE the artist from years back when he was a teenager. He is a post graduate student with a beard now. He works with THE ROMBERG GALLERY and others.

Dr. Sane said he looks WELL ADJUSTED and he inquired as to whose kid he is.

*Also his use of HAPPY is his subconscious substitution for the word GAY.

What kind of dude says another dude is WELL ADJUSTED.

Dr. Sane is QUEER EYE FOR THE STRAIGHT GUY.

And man, that photo he is young. Guess Dr. Sane thinks
A CONQUEST TODAY IS TOMORROWS
COMPETITION.

Dr. Sane on that pipe.

Dr. Sane needs to change his name to Chester.

Dr. Sane is UNCLE ERNIE from
THE WHO film.

Dr. Sane got sugar in his tank.

All Dr. Sane gotta do is say sumpin' and YOU KNOW WHUT HE BE.

Dr. Sane ain't got no kids. Whut he doin' outside duh day care?

You can't let him roun' the
HAPPY MEALS!

Get this straight Dr. Sane.

Ross Priddle is a NEO CON.

Was this his peek or did things get better?

That boy needs to quit eatin' fried chicken and wash his face.

From now on I promise to take my meds.

I like the 82nd Airborne patch. All the Way!

In SAVING PRIVATE RYAN that is hilarious, HILARIOUS when that gyrine picks his arm up off the beach. Dr. Sane, tell yuh grandaddy we thank him for his sacrifice. PSYCHE!, I mean SIKE!(* gotta use Eboneranto. Gotta conform to the post Western requirement.)

Dr. Sane stop examining that boy's patch! He is not going
ALL THE WAY! with you.
Leave him alone!

The 82nd airborne are losers! In fact PRUSSIAN ARISTOCRACY are the only real men worthy of being called soldiers. Sgt. Alvin York turned TRICKS. Watch the movie. He is an expert saying GOBBLE GOBBLE.
82nd. LLLLOSERS. From a dirt bag army. Alvin York's outfit's logo is modeled on a dog's linga. They are called THE BIG RED ONE. I gotta go watch SAVING PRIVATE RYAN to laugh at that man picking his arm up off the beach. Too bad winston churchill isn't around. Dr. sane could trade him his butt plug. Oh. I forgot his daddy is already wearing it.

America is an out house with corn cobs for tissue.

Wall Street is GOOD the protestors are trash.

ABBEY HOFFMAN says the Wall Street protestors are a disgrace to STREET THEATRE.

JESUS OF NAZARETH IS NOT ANYONE'S LORD. IN FACT HE IS A DIRT BAG. SO IS YAHWEH JEHOVAH GOD. AND THAT ICON OF THE SAND AND DATE RELIGION THAT IS SO RIDICULOUS IT SHOULDN'T EVEN BE ACKNOWLEDGED BY NAME. NO WONDER THEY USE DOOR MATS TO PRAY ON.

DSM is a book to use to understand why your mom created you in that repugnant act. Abortion is the removal of a parasite like RID is used with a lice comb. SUPPORT ABORTION! Pro Life is PRO PARASITE! ABORTION IS A COLORFUL AND BEAUTIFUL ART FORM. Why not have a TACO SALAD and a BEER while having an abortion. At the completion chew a glob of GUACAMOLE. AND LLLLAUGH! YOU SILENCED AN IMAGE OF THEIR REPUGNANT LLLLARD! PRAISE THE LARD! MADELIENE MURRAY IS THE QUEEN OF HEAVEN!

DRIVE THROUGH ABORTIONS! CHEAPER THAN FAST FOOD! AND TAKE THE AFTER BIRTH HOME AS AN EGG DROP SOUP! THAT IS ART!

DON'T BE LATE TO YOUR APPOINTMENT WITH DR. KEVORKIAN!

You fifty five year olt. You need to stop all dih art non-sense.

TRUMAN is NOT happy and well adjusted.

Was this taken in a Piggly Wiggly parking lot? Maybe that's why he looks so happy.