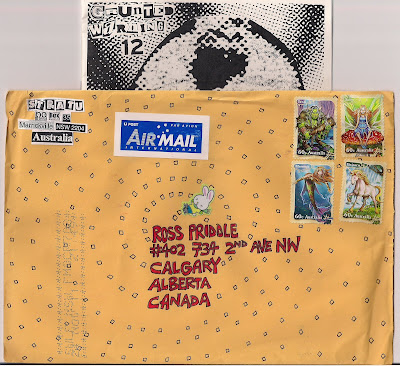 Blackguard 23
Posted by drosspriddle at 11:30 AM

Copyright it all for yourself.

If we ever get REAL. By this I mean BIG and FAMOUS you can renegotiate it all. But that's not reality now so I don't give a. Anyway, remember I'm creating ART 24-7-365. I'm ROCKING. So pick up the bass Stu Sutcliffe and play along until you die of a brain tumor. But make sure you put me in your will so I'll get some coins to keep on flowing.
PROCEED with your whimsey lunatic. The collaboration should sound better than Paul McCartney and Michael Jackson.

P.S. I know you are not STRATU. I just posted the message here.

ANNOUNCEMENT FOR ALL WOMEN

Accustomed to the monthly purging already, why not drop shelled eggs in s slather of mucus like a DUCK BILLED PLATYPUS or alligator. Then women could leave there eggs to be kept warm by their STAY AT HOME HUSBAND KRAVATS while they wheel and deal work in the business world. Forget the nine month pregnancy process. LAYING EGGS is the answer. It would end abortion. If a woman gets knocked up she can just lay the egg in a flush toilet if she wants to reject the mating due to the man being viewed as INADEQUATE. Using SCIENCE and advanced Space Alien technology soon super-model-pretty-women can lay eggs. Then EMO MEN wearing sandels and t-shirts, WALLSTREET PROTESTOR CRUD can have a real job keeping the eggs warm until they hatch. Real POWER WOMEN IN CHARGE have muscular thighs and arched ribbed POWER CLITORIS' fully exercised in shape to bring fulfillment to the POWER WOMAN. Tired accordian phallus George Castanza men are obsolete. THICK MICROWAVED WARMED GLASS DILDONIC ANACONDAS give the POWER WOMEN their PUSSIAL WORK OUT! Soon women shall mutate to reproduce like an earthworm. The clitoris shall develop two big testosterone producing raisin testicles on either side for SELF IMPREGNATION. Weak WALL STREET PROTESTING BERKLEY MEN BOYS no longer are needed to create a pregnancy. Using Space Alien technology POWER WOMEN can gratify themself narcissistically by just looking in the mirror. Women need no men. But those still on earth shall serve as kravat slaves. Read The Newsletter! Send stamps or you get NOTHING. No stamps. No Newsletter! Write:

TRUMAN BENTLEY JR. talked to the lesser god of the christians. He is the god they invented. They call him yaw-way or heh-hoba. They like to say he made everything and is all powerful. He can invent some things. He invented the triangle wooden golf peg JUMP ALL BUT ONE GAME they have for sale and on the tables at CRACKER BARREL RESTAURANTS. He also is the inventor of ASTRO GLIDE. Anyway yaw-way's real name is
COUSIN LARRY. Since
TRUMAN BENTLEY JR. is BETTER than everybody else the Extraterrestrial Space Aliens are laughing at the average humans. Like you. Learn more about what THE SPACE ALIENS think about YOU and the UFO PLANS for the
plannick-urf! Read THE NEWSLETTER! Send stamps. No stamps, you get nothing. Send stamps you'll get some Newsletters. Write:

MAIL ART IS FREE FOR BUMS.
NEWSLETTERS COST STAMPS!
NO BUMS NO STAMPS! NO STAMPS NO NEWSLETTERS!

THE SUN IS UP! Why ain't you checking on BENTSPOON postings. too tired from open mic poetry nonsense. Coffee shop schmoozing. Get to work on BENTSPOON now! RRRRIGHT NAH-UH! Before you get more stale like aaaaaalll the artists in yankeeland.