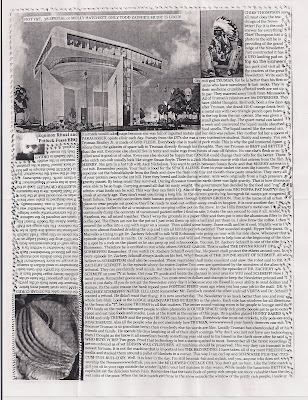 Great! Thanks Truman. Did you find that Canadian $20? Or did you burn it on the patio grill?

Its not lost. Just somewhere in this hoarder's mess. When I find it I'll send it north. Start collecting those good U.S. stamps for my collection. I'm sure you have a few. Start looking at your archives. There has to be a few.

No crap. It fell out of the envelope and zipped a few feet away on the hard wood floor. I was looking at the zine in the envelope and then noticed it on the floor. I picked it up and looked at it because it looks so high tech compared to U.S. green. I stacked it on top of the mail on three post cards. I sat it all on the dining room table. Two months later not even the mail is there. Winter jackets. Shoes. Dried paint on styrofoam meat packaging used to mix paint on. I have been vaccumming with a shop vac and throwing away store advertisements and newspapers so hopefully it shall be found. I don't think I stuck it in a book.

If it get too cold there in canader. Rawst can cut open uh Yak like in STAR UH WARS when Luke got lost out in the snow. And if Rawst git hawngree he can boil up some RAMEN BEARD HAIRS and FANGUH NAIL CLIPPINZ. Or he can go get uh sack uh groceries from Father Barrington down at the Philadelphia Catholic Mission And Youth Musawdge Hostel. Or Rawst can Glue sticks together and cover them in Saran Wrap to create a nice Green House tuh get in. Or for a jacket he could cover in lard like uh CHANNEL SWIMMER and then go to the Barber Shop and roll around in hair clippinz. Or he could spoon in a cardboard box with Theo after guzzling some red wine. Or he could get a job at Burger Fink and eat bites off the line all day and at closin' curl up in the store room with uh comic book and a glow stick. Or he could catch the neighbor's cat to stir fry or swipe a pet rabbit from a back yard hutch. Or he could go look for wild truffles on the road to the fish hatchery. Or he could start burning his mail art collection in the fireplace. Or he could sleep on a foam army surplus bed roll in the post office lobby. Or he could sleep in the Greyhound Bus Station.

ITS NOT UH MASSAGE!