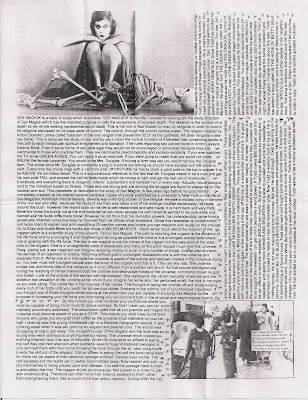 Truman Bentley Jr.
Posted by drosspriddle at 11:06 AM

Ross. When you read the newsletter do you laugh. Any recent stuff extra crazy. Any directions I need to work on. I know I am insane and the Newsletter is insane but in its errieness what does Ross have to comment on. I mean really. You are talking to a crazy person. So tell me. What is my best crazy attribute. Critique. Tell me what is interesting. What should I write about. I'm bugged out on two pots of coffee right now.

LOL is that Truman right there in the comments???

Jacqueline sold a rare first edition mint condition copy of a WILLIAM BURROUGHS book for me. We split the proceeds. The same day I bought the book for fifty cents I picked up a copy of NAKED LUNCH next to it. The NAKED LUNCH copy was in its dust jacket in mint condition. I started thinking of Kurt Cobain and Burroughs and how I resent him and all his ilk. So I put the book back on the shelf. It was fifty cents. I knew it was valuble but I was taking the piss out of it by not buying it. Later that day I researched it and a similar copy sold not in as good condition for over $1,500.00. I thought it was funny. I still think it is funny.

Truman, we need to talk. I am writing you a letter.

For a while she was collecting bright plastic collectible figurines. She had all sorts of cool thrift store finds. Any particlar new figures. Those 1960's beige big eyed cartoon statuettes with the funny quotes beneath them are cool. I saw lots of those recently. They appear in thrift stores usually right after holidays. I guess people clean out their places and donate stuff to thrift stores then. If I see any of those statuettes I'll put them behind stuff so they'll remain there if you want me to find them again. Any cool new stuff. The MY PONY figures seem to be a craze now. I wish there were more cool vintage POPEYE stuff around.

Ross. I looked at the link. She creates cool DAY GLO art journals. That reminded me to mention to you that you should have a mail art call for DAY GLO ART. There are a lot of cool people who create exclusively in day glo paint. Years ago there were BLACK LIGHT exhibits. We need to bring back DAY GLO and BLACK LIGHT shows with psychotronic music, slides and films. Ross priddle. You need to do some asemic poetry word writing on panels or canvasses. Ask our friend the coolest artist
"1973"(H.H. lunch box owner), who is the number one female artist out there today to give you suggestions. Ross. Reading all that stuff on ASEMIC writing you told me to study gave me the idea. Since you are the GURU of it you would be great as the director of the new ASEMIC WRITING-PAINTING movement. You know who, "1973" incorporates really cool decopage material in paintings already. Ask "1973" how to incorporate the clip art on a panel or canvass. Go to a home store that sells wood and buy a small finished piece of wood. Ross. The paintings are inspiring art. Art this year should be a combination of writing and painting. Tell H.H. lunch box owner "1973"/Mrs.Smith's student, the idea about the DAY GLO BLACK LIGHT PAINTING MAIL CALL EXHIBIT IDEA. That would be cool to have in a gallery showing at night. I'm inspired by the idea to crank out some canvasses. Let me know what you all think about the idea.

Ross if the BLACK LIGHT DAY GLO MAIL ART CALL is created ask all the artists you know to suggest ideas. It could be cool.

How about a Canadian Gallery? Is rent in good places available? If you could find an upstairs living space with down stairs store front that would be cool. Then you could get all the mail artists to send paintings for commission sales to the shop. Ask your friend "1973" what they think about a Canadian Gallery. It might be a cool idea. You would have to move to the upstairs apartment/downstairs gallery place. Ask your friend
"1973" about the idea. That might be a cool thing. I think you guys could run a cool gallery. I hear the Canadian economy is better and growing fast. If I had people painting fast selling their paintings I could just build canvasses all day. I could make it a 24-7-365 canvass creation thing. I could eat fast food and drink coffee creating canvasses. It might work. But you guys would have to be selling lots of paintings to make it work. I'd get 40%. 10% for shipping. Then you two could split the fifty percent.
Finding the materials and building the canvasses is the hardest part. Plus I'd have to send them to you.

LISA FRANK style day glo colours would be cool for the mail art show too. Ross. Get folks on board with the idea. Black light paintings and day glo colours. Also big papier mache PONY head masks in day glo would be cool. Get all the cool artists on this.
"1973" could create some cool day glo shirts too. Get to work Ross Priddle. Yarn is Day Glo! Yarn could be worked in on it too.