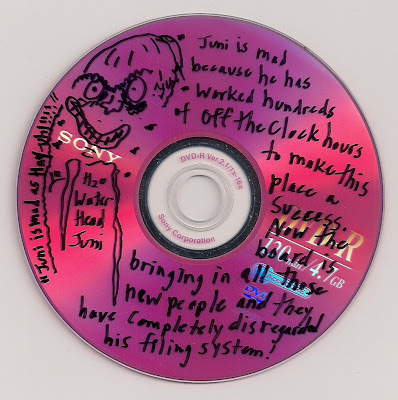 HELLO
Posted by drosspriddle at 11:20 AM

A fork lift pallet company closed. They had a dumpster full of cut off end pieces. Perfect for making small 5X7 size canvases. Some smaller. Some a bit bigger. Anyhow they are already pre-cut lengths. I got on old cardboard refrigerator box. I put it in the shed. I carefully stacked all the pieces from the dumpster in there. So now even on rainy days I can get in the tarp cover hut I built to block the sun and nail together canvasses. Ross. If you need any canvasses, and if somebody we know needs some canvasses, you know who, ask them and if they need some canvasses I'll start making some more for you guys. Let me know goons. The Spring weather is soon and perfect time for painting. PAINTING ROSS! Think painting! Encourage our friend to paint more too. Anyway building canvasses is starting up again since I got all the dumpster wood pieces.

I just got news WATERHEAD got a job in Huntsville working for MERCK as a quality controller for formulas. He is mad because the younger guys get a new car and clothing stipend. He drives a two door GEO METRO with MERCK on the door. I told him not to complain. He gets at least 30% more being on salary than them. Waterhead also is teaching a science class at the local college CO-OP TECH thing there. More news from HUNTSVILLE Alabama soon. Oh yeah. He is pissed because they have a FOOD LION instead of a PUBLIX grocery store and he is addicted to eating PUBLIX brand imitation TUMS tablets. I'll draw some anti-acid tablets in a cartoon soon. To irritate Waterhead when he is tired we say, WWWWWUTUHS, WWWWWUH-UTTUHS, WWWWWUH, WATERS!

Funny funny. You know that announcer is the first clip before Robert at the training center. It is always there. Then you gotta post the link to you know who being funny imitating that too. Next ya'll uh be clowning imitating DR. ZACHERY SCHMIFF and KARL KOLCHAK.

Hey. Glo sticks could be passed out to people as they walk through the BLACK LIGHT DAY GLO ART EXHIBIT. There could be yarn stuff and day glo painted sculpture too. There are lots of stuff that works with black light. Ross. create some ideas. Asemic markers in day glow colours on a dry erase board. Viewers could write asemic writing on the dry erase boards under black light lighting. Input Ross. Ideas.

Replace a street lamp with a black light near a wall with day glo paint pens around so people can leave day glo asemic graffiti. Maybe have it set up outside the gallery that has the black light exhibit.

Draw more adventures of H2O Waterhead from the Juniour High Days. Stories from the Chorus room and science class. Mention the tales of Kenny Magoo and The Flabslaw Lounge.

Explain the tale of stealing the small cedar christmas tree from Simon's Lake back in 1974. How the tree grew by the drive way until
H2O cut it down because it reminded him he was going to hell for STEALIN'. He just couldn't look at the tree no more. In reality he should have rooted some sprigs and returned a small tree in a platic pot, one for each year the tree was stolen. But it was too late. H2O had already chopped down the tree.

There is black chalkboard paint. Wood panels can be painted black. Then those day glo chalk pieces can be used to draw on the chalkboard surfaces under black light. An ASEMIC WRITING MAZE in day glo sidewalk chalk with the black light. Ross. What is your opinion on the black light with day glo art and or writing. It could be cool.

Ross. Since yesterday I thought up some more ideas. SILLY STRING in a can is in DAY GLO colours perfect for black light. Also make up comes in DAY GLO so people working at the EXHIBIT could pass out cans of SILLY STRING with tickets while wearing the make up. The ticket would include the tour, food, and the can of SILLY STRING. The foods could be stuff that looks bright under black light. It is a great idea. This morning it rained but has now stopped. I'll build a few canvasses and paint them black. Once dry they can be used for BLACK LIGHT art. If they are needed for regular stuff any light colour can paint over the black to create a new surface. I'll build several small canvasses today. Try to get some artists interested in the BLACK LIGHT DAY GLO EXHIBIT IDEA. Maybe each artist could create a black light display at their own place and take pictures to post on a collective type web site exhibit. I think a tunnel entrance with asemic writing in day glo under black light would be cool. Get the YASHICA out and take some color photos of black light art. Set up still life displays and photograph them under black light. Get an extension cord. Take a lamp outside and take ice snow black light photos.

Put out the call, Truman. Have a Black Light/ Dayglo mailart show! You'll be a Mailart Star!

Truman, I would do that kind of show. I can have an exhibit in my house of my paintings and others can have it in their house and we can pick a day that we all show our galleries online. I will use all kinds of bright colors.

To make it easy for everybody why not call it "DAY GLO 365" then everyone can post something every time they think of something new or create something new or photograph something new. People could send stuff by posting it on various related mail art sites saying PLEASE FORWARD to "DAY GLO 365". The DAY GLO 365 site could be your site perhaps, or that one Ross started for me, or maybe Ross could create one. I have no interest in learning any computer skills. I barely can post on Ross' site. If a site isn't easy just to type on and submit I am too SPECIAL ED to figure out how to post. If it is called DAY GLO 365 no one would be under pressure to meet deadlines and so it could be a constant thing. The thing that would make it a success is if people got obsessed with it like the ray johnson head thing is. So get to work Jacqueline. Your husband could submit any DAY GLO tattoos he creates for people too. The thing about Ross' blog is it is easy to post on and you can check it often so that is why I have been posting there. Plus Ross is tolerant of stuff where most people wig out. However Ross does keep things in check. He requires I read all his liberal ideologs all the latest thinkers etc. I consider myself a liberal like HUNTER S. THOMPSON was. Most liberals don't consider him one. Anyway the DAY GLO 365 thing may turn out to be the purpose for you creating and collecting DAY GLO stuff all these years. Plus like GOTHS Lisa Frank type DAY GLO people are out there. Many dormant. You could be the MRS. UNIVERSE of DAY GLO. And your husband could be KING DAY GLO. You can make him a crown and robe and pose him with you in all of your daily DAY GLO travels and adventures. Get to work creating DAY GLO 365 stuff.

Jaqueline. Post your address so people can send you DAY GLO ART. By the way goons. Jacqueline's husband Johnny, not to be confused with the other JUNI who is a cartoon, is a TATTOO ARTIST and he'll beat your a#! if you are sketchy. So no freaks, just
ART FREAKS allowed to send cool stuff. Homie don't play dat weirdo sh*%.

Truman, check out my blog. I have some pics I think you will enjoy :)